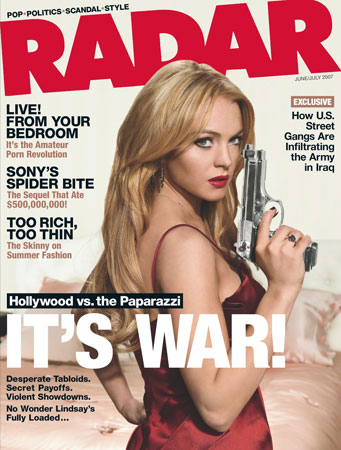 Despite recently admitting that she would be sad without paparazzi attention, Lindsay Lohan is out, gun blazing on the June cover of RADAR Magazine.

The little vixen -- who posed with a series of weapons during the photoshoot, including a flamethrower and a submachine gun -- reportedly posed for this cover because she wants "people to pay attention."

While she is not actually in the article, there are more pictures of her inside. Judging from this one, they won't be tame.

So what do you guys think, does Linds look sexy and badass? Or is mixing sex and violence in this way the wrong message to send young women? Or is it just silly considering we know that she really loves the paparazzi's attention?