One of James Franco's many talents is writing, and one of his books is now the basis for a movie — starring him, of course. In the trailer for Palo Alto (based on his short story collection of the same name), Franco plays Mr. B, a high school soccer coach who takes his mentorship of player and student April (Emma Roberts) a little too far. April's not the only one having a rough time at school; her classmates Teddy (Jack Kilmer, son of Val, who's also in the movie) and Fred (Nat Wolff) are going through their own struggles and rebellions. 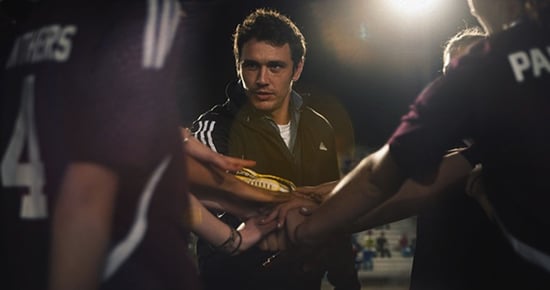 Even though Franco didn't direct Palo Alto (that'd be Gia Coppola), I'm very much looking forward to what Franco delivers here, both as the provider of the source material and on screen. His role is more than a little creepy — but so was his role in Spring Breakers, and it turned out to be completely entertaining. We'll see if the same is true in Palo Alto, which will hit the Toronto International Film Festival, but doesn't yet have an official release date. Either way, you can catch the trailer right now after the jump.

Movies
The Wickedly Magical Ending of Craft: Legacy Leaves a Possibility For More Sequels
by Mekishana Pierre 22 hours ago

The Craft
The Craft: Legacy Features a Cameo That Leaves Us With a Lot of Questions
by Mekishana Pierre 23 hours ago

by Brea Cubit 36 minutes ago