Unless you've been living under a rock, you know Paris has a new album coming out. She's been everywhere this summer celebrating her music, and now the big day has come. Paris the album hits stores tomorrow, and Paris the star is very confident in its success. In fact, she says it's so good that when she listens to it she cries. Yes, she really said that. Here's more: 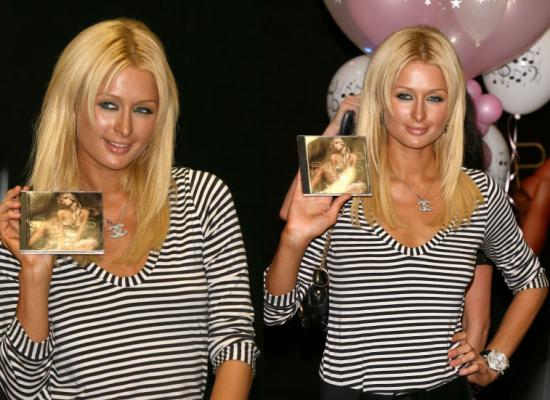 "People go crazy," the 25-year-old socialite/reality TV star/singer says in an interview in the September issue of Blender, on newsstands Tuesday. "They love it. Everyone's like, `Who is this?' I don't tell. Because I don't want someone putting their phone up and recording it and making a ring tone off of it.

"Paris" the album was set for release Tuesday. Hilton's breathy, reggae-infused single, "Stars Are Blind," has climbed to the top of Billboard's dance music chart.

Yes, we all want to cry now that Paris is a pop star as well as whatever she was famous for before. Does anyone else think she look oddly different in these pics? Could she have gotten some plumping done to those lips? Lots more pics of Paris promoting Paris at Best Buy so read more