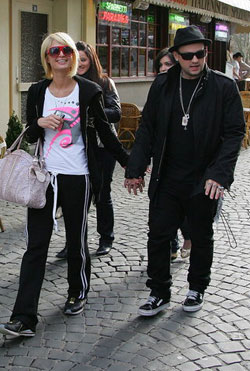 Paris Hilton and Benji Madden tied the knot at the Little White Chapel in Las Vegas last night. Just a few years after Nicky's ill-fated walk down that same aisle, Paris and Benji's whirlwind romance went exactly where we all feared it would. The duo has been touring around Europe, but took a spur of the moment private jet to Vegas to tie the knot!

Benji recently broke off his engagement to Sophie Monk and Paris has been "engaged" a few times before. Benji was quoted as saying about the surprise nuptials, "She fell on her face, and I fell in love. At that moment, I knew she was the one." To read more about the wedding and see the first pictures of Paris the bride just read more