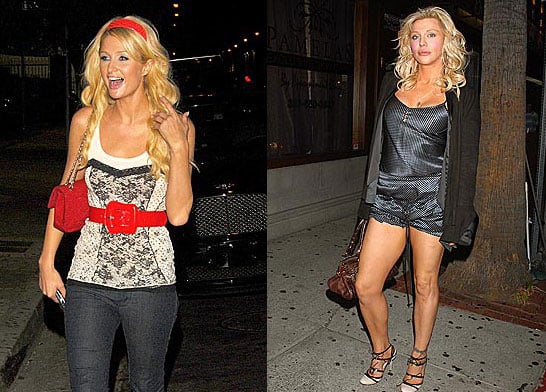 Paris spoke to Ryan Seacrest this morning to clear up the rumors about last night to tell her side of the story. Paris admits to speeding and having a margarita but was only driving fast since she wanted to get an IN-N-OUT Burger. She also said she thought she was being made an example of since there were a lot of paparazzi around and the cops wanted to show she doesn't get special treatment. She also told Ryan she was not really arrested. Take a listen now.

Apparently Paris was also with Courtney Love last night at Simon's at the Sofitel and word is Ms Hilton left shortly before 11. Not a good partner in crime. She also supposedly had plenty of opportunities to eat. (Thanks Shlee Reynolds) She must have been really starving after the whole police station thing. Besides, Carls Jr must be pissed she keeps talking about IN-N-OUT. Lots of pics of Kevin and Nicky to the rescue so read more