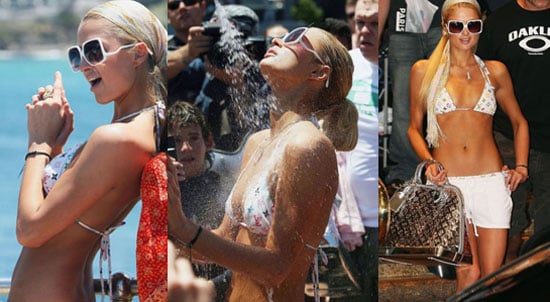 Yesterday we told you she headed down under for NYE and to help launch Bondi Blonde beer. Even though Paris has been flying around the world this week, she almost didn't make it to Australia since she forgot to bring her passport to LAX. As expected, Paris attracted huge crowds at Bondi Beach when she hit the sand in her LV bikini and even found a friendly guy to offer her a towel when she forgot that too. Here's more: 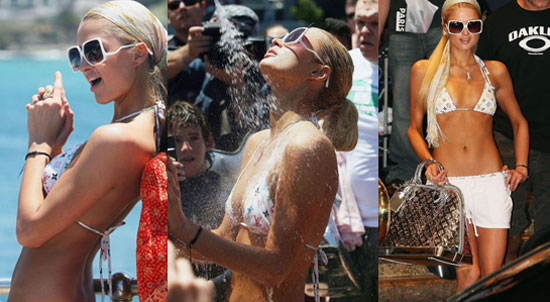 The blonde forgot to bring a towel, but chivalrous bystander Conrad Panebianco, 19, was on hand to lend his.

In return, Paris offered to sign the towel - but she didn't have a pen.

"Her bodyguard said I could come past her hotel tomorrow and pick it up,'' Panebianco said.

Hilton then gave him a tip: "You should sell it on eBay.''

She caused quite the commotion with her shower scene. Can you see the young boy just staring? So scary. I do however love the bikini. Too bad she went overboard with the huge silver shiny LV bag and her BFF of the moment is matching with the gaudier version in gold. We bet tomorrow will bring even more Paris pics of her most recent escapade. To see more of the girls, their bags and the beach just read more

Previous Next Start Slideshow
Paris HiltonBikini
Around The Web