Update: Penelope's rep gave us the following statement: "Penelope Cruz and Javier Bardem were married in the beginning of July at a friends' house in the Bahamas. It was a small ceremony with just family members. Penelope wore a dress designed by her long time friend John Galliano."

Longtime loves Penelope Cruz and Javier Bardem tied the knot earlier this month, her rep confirmed to People. Apparently the two said their "I Dos" at a friend's house in the Bahamas surrounded by just a few of their closest friends and family. The bride wore John Galliano. 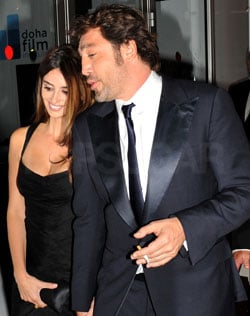 There have been rumors the two were engaged since last year and apparently they already took the next step, joining a number of other celebrity couples who have July 2010 as their anniversary.

Penelope and Javier were recently spotted frolicking on the beach in Hawaii where she's filming Pirates of the Caribbean 4 and they traded one sandy location for another to tie the knot. An extended honeymoon may have to wait since Javier will soon have to start promoting Eat, Pray, Love but for now, hopefully, the newlyweds are enjoying their first few weeks as Mr. and Mrs. Congrats to Penelope and Javier!