Madonna confirmed today that she's in Malawi to adopt another child and has been working on the process for over a year. As she waits until Friday's ruling in her case, she brought her son David to see his biological father, Yohane Banda. It's the first time since David left Malawi in 2006 that he's seen his father, and afterward Yohane made a lengthy statement about seeing his son. He said: 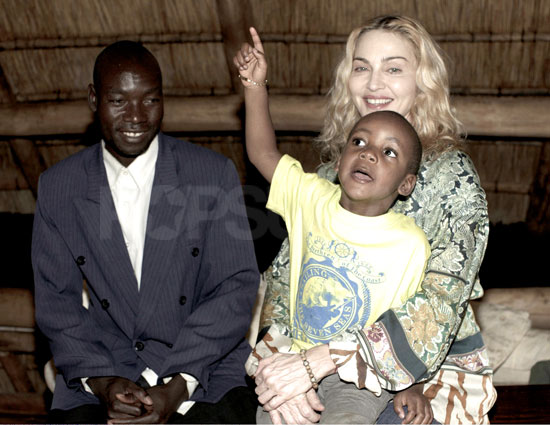 "He asked me who I was. When I told him, 'I am your daddy,' he looked surprised. . . It's amazing how David has grown; I can't believe he is the same small and sickly baby we left at Home of Hope. He seems to be a polite boy for he asked if he could sit on my lap. Then he started playing with my nose; I don't know why. He is quite chatty and intelligent. He asked me lots of questions about lots of things. He asked me whether I ride horses. I told him horses are for the rich and he asked me why I am poor. He told me his mum likes riding horses and that he too rides horses. Then he told me a story when one day he and his brother, Rocco, rode horses and fell. He told me his mum spanked him because they are not supposed to ride horses on their own."

To see what else Yohane said, just read more.

"He told me his mum plays music and asked me what I do for life. I told him I was a farmer. He asked what a farmer does and I explained to him that we use hoes to till the land. He told me his daddy, Mr Ritchie, took him to a farm but it had a tractor. I told him in Africa we use hoes. He seems to like his daddy, Mr Ritchie, so much that I was a little sad Madonna broke up with him. I would have loved it if they sorted out whatever problems they had instead of divorcing because divorce is bad for kids. I was very happy to meet David again. He reminds me of the two sons I lost in infancy. I sometimes shudder to think that David could also have met the same fate had Madonna not adopted him. I am really grateful to her for saving David from possible early death. She just greeted me and told me about David's school. She is a sweet lady."

Bindi Irwin
Send Tissues! This Exclusive Look at Bindi Irwin's Baby Shower Has Us in Tears
by Maggie Panos 4 days ago