Ashlee Simpson looked adorable in her romper and pearls at InStyle magazine's annual Summer soiree last night at The London Hotel in LA. Kellan Lutz wore his signature gray, while back in the States on a break from working on Eclipse in Vancouver ahead of next week's NJ Twilight convention. Kellan's off-again girlfriend AnnaLynne McCord wasn't in sight, but her 90210 costars Shenae Grimes and Jessica Stroup laughed together on the red carpet in their short dresses. Taye Diggs posed proudly with his pregnant wife, Idina Menzel, while Michael C. Hall and Jennifer Carpenter smiled for the cameras as many more celebrities piled in to the party for a star-studded night of style. 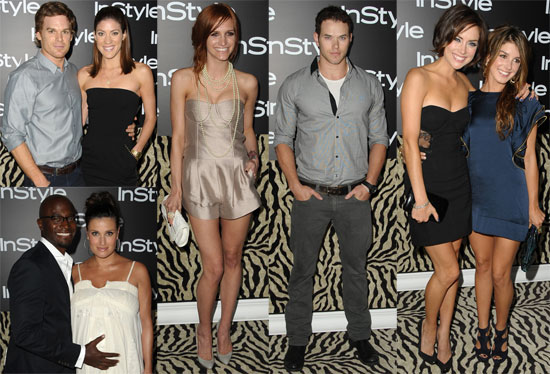