The only brightness in Beyonce's ensemble was her smile at last night's Gotham Magazine gala in NYC. Otherwise she kept entirely covered in a slick black dress for the evening. It's only right that she hit the town to celebrate as her new album I am . . . Sasha Fierce hit stores yesterday. At the party she revealed that she would love to perform at Barack Obama's inauguration, but earlier in the day, B did a radio interview where she talked about her hilarious appearance dancing alongside a pantless Justin Timberlake on SNL. She said, "I still can't believe he did that! He was incredible. We rehearsed it two times. He has this photographic memory. He could probably kill it if he wanted to. Not the feminine stuff, but... he's so talented and so naturally funny." Beyonce seems to have a great sense of humor and we'll have to see how she — and her famous alter ego Sasha — do with record sales on opening week. 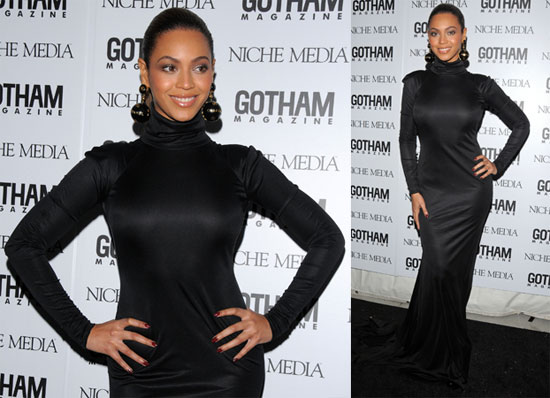 To see more of Beyonce in black just read more.

Beyoncé Knowles
Around The Web