Brad Pitt and Angelina Jolie didn't win at the Critics' Choice Awards, but it was still a busy night for the power couple. After lighting up the red carpet, they signed posters and mingled with fellow actors like Brad's Button costar Taraji Henson. Angelina also mentioned her plans to take on fewer projects in the future and gushed about Brad's performance in the movie. She said, "When I first saw the film, there were a lot of blue masks that they had to put on his face, so the first half I didn't see his acting inside the little guy. Then, when I saw him when he was young . . . he is just so charming. I was really moved. I thought he was wonderful." Somehow we're not surprised that seeing Brad go back to his younger years was fun for Angelina, and it sounds like she's perfectly happy to keep watching her man work as she takes a break. 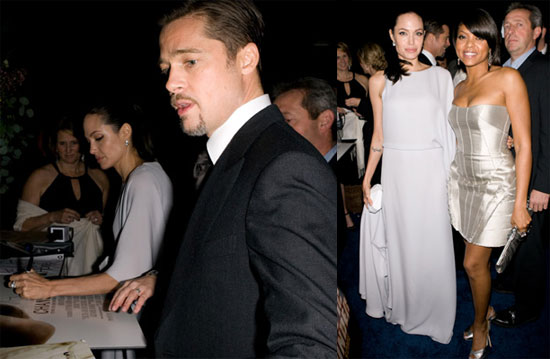