Britney Spears and her boyfriend Jason Trawick left the recording studio in Stockholm together on Saturday. Dating her manager is just the most recent example of how Britney loves mixing business with pleasure, but he doesn't have to worry that she is cheating on him with her producer. She did spend a weekend in Atlanta with Dallas Austin, but the friends were together to discuss "music, life, and work." Britney has been sightseeing with Jayden James and Sean Preston as she travels Europe on tour, but one place she won't be bringing them is Russia — she apparently received death threats preceding her shows in Moscow and St. Petersburg. Instead of staying in Russia, Brit will be commuting in from Finland before reuniting with her sons in London in a few days. 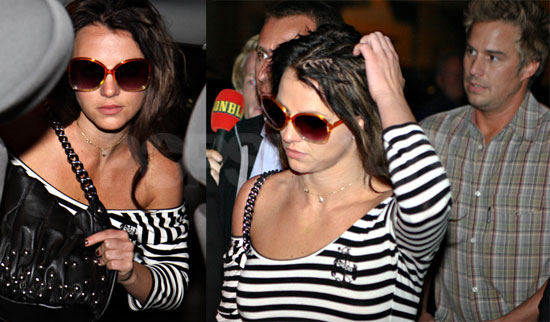 Britney Spears
Britney Spears Seemingly Addresses Latest Doc About Her: "I Scratched My Head a Couple of Times"
by Njera Perkins 1 hour ago

Britney Spears
Britney Spears Showed Off Her Engagement Ring, but Did You Notice This French Manicure Detail?
by Danielle Jackson 2 weeks ago