Cam Gigandet went out to lunch at Cafe Med in LA yesterday with his girlfriend Dominique and their daughter Everleigh. Cam may have met his demise in Twilight, but he's still raking in the accolades for his work in the movie, and next weekend he's up for Best Villain at Spike's Scream Awards. We're rooting for him and also hoping that some of his costars, namely Robert Pattinson, Taylor Lautner, and Kristen Stewart, attend the show, where we'll get new New Moon footage. While we won't be seeing Cam in any of the rest of the saga, he has tons of new projects coming up. He's been shooting a dark and scary movie, The Experiment, and Kristen Bell will be joining him, Cher, and Christina Aguilera in the sexy musical Burlesque. 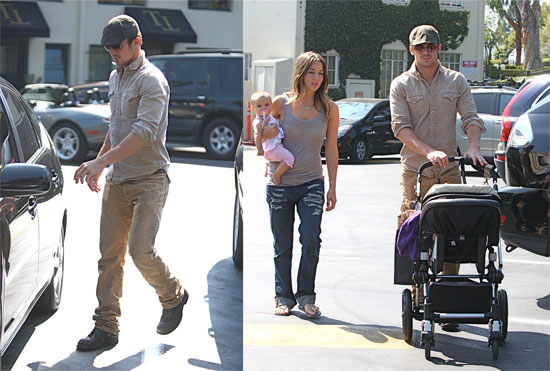 Meghan Trainor
Here's What We Know About Meghan Trainor and Daryl Sabara's Son — Plus His Cutest Photos!
by Alessia Santoro 3 days ago

Mandy Moore
Mandy Moore Is a Mama! Meet Her and Taylor Goldsmith's Son, August
by Alessia Santoro 5 days ago