Big-hearted stars of all ages got together for a sunny afternoon in LA yesterday at the 20th annual A Time For Heroes Celebrity Carnival to support the Elizabeth Glaser Pediatric AIDS Foundation. Ashlee Simpson and Pete Wentz brought Bronx to his first charity event, where he stayed close to mom and dad at the t-shirt making booth — check out an adorable video of Bronx below. Heidi Klum was there with her three kids who could not get enough of the giant slide. Most of The Hills girls made appearances though Lauren Conrad and Lo Bosworth showed up after Kristin Cavallari had already done her red carpet walk. Stephanie Pratt was preoccupied thinking about Heidi and Spencer down in Costa Rica while Lo joked that the carnival was more her speed than bug eating when it comes to charity. The Disney stars were also out in full force including Selena Gomez and a performance by Miley Cyrus to round out the day of philanthropy, delicious food and wholesome fun for so many families. 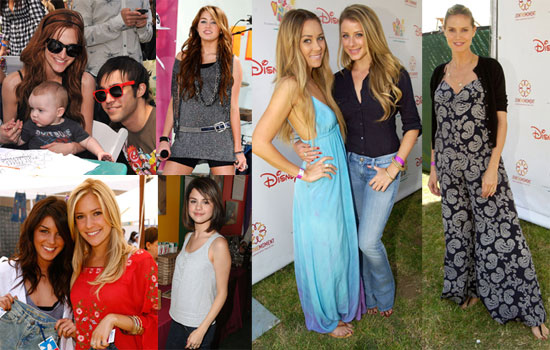 To see cute video of Ashlee and Bronx as well as lots of photos including Vanessa Minnillo, Nick Lachey, Melissa Joan Hart and others just read more.