With Victoria shooting her commercial in London, David Beckham had their three sons to himself back in LA yesterday. Brooklyn, Romeo and Cruz headed out shopping with their dad, picking up some goodies at The Grove. They even made time to stop for haircuts where David and Cruz got matching mohawks — too cute. While Becks seems all heart when he's with his boys, he's not about to apologize for an altercation with an angry fan at the Galaxy game earlier this week. He said, "It's not a setback for myself. It's other people that have to change. It's not about whether I can move on. I wasn't the one booing. I don't like my son seeing that and hearing that. From an organized group of fans, I think it was disrespectful." David's soccer drama doesn't affect how most of you feel about him, but it sounds like he'd rather make sure his young kids aren't drawn into any ugliness. 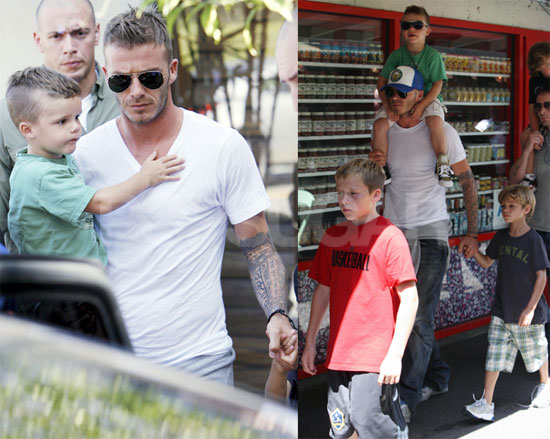 To see lots more of Becks and his boys just read more.