David Beckham broke out his stars and stripes towel yesterday to hit the beach in Malibu. He's back home in LA after his weekend trip to Washington, DC, where he thrilled the crowd by going shirtless yet again. David's abs didn't make it into the Final Four of our Summer Shirtless Bracket, but make sure to cast your vote on the last remaining hotties! Victoria and Cruz are en route back home to the rest of the Beckhams boys, amid news that Victoria's happy with her three kids and isn't trying for a girl. She'll get a whole lot of time with ladies, though, with her upcoming first appearance on The View this September 14. 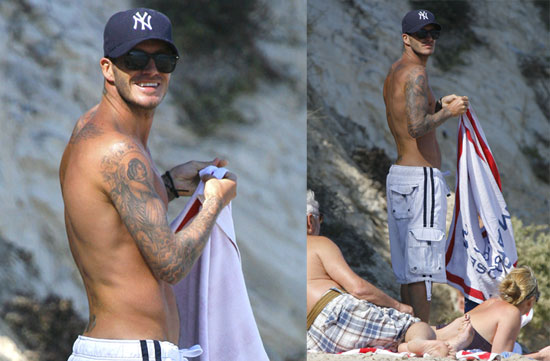 Celebrity Fitness
Victoria and David Beckham's Plank Challenge Is Adorable — and Harder Than It Looks
by Maggie Ryan 3 weeks ago
Michael B. Jordan
Indulge in Photos of Jonathan Majors and Michael B. Jordan Filming "Creed III"
by Perri Konecky 3/30