David Beckham brought his three boys out for ice cream in LA last night. He had his hands full afterward carrying Cruz and Romeo back toward their car, and David even revealed that he's walking around with a boot on his foot. His injury didn't get in the way of a victory for the Galaxy last weekend, when his two youngest sons joined their older brother Brooklyn on the sidelines. David stayed in California with his boys during Posh's latest trip abroad as she gets down to work on one of her many ongoing projects. She did find a chance to give a comment to People supporting its decision to include David on the Sexiest Men of the Year list along with big winner Johnny Depp. "David is a wonderful husband. He is kind and incredibly romantic," she said. "He is a brilliant sportsman and an amazing father. He idolizes our three boys, and this is what makes him 'the sexiest man alive' to me." 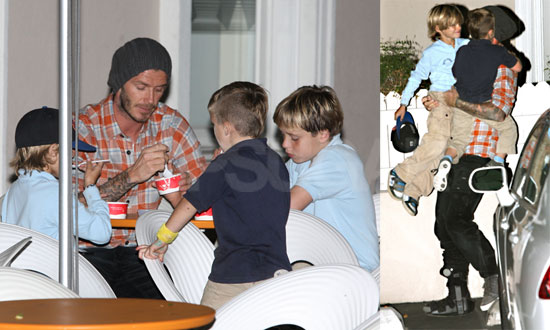 David Beckham
After This Massive Neck Addition, Romeo Beckham Now Has a Matching Tattoo With Dad David
by Kelsey Garcia 3 weeks ago