David Beckham slipped back into his LA Galaxy gear to train with his US team yesterday. He nursed his bad ankle with an ice pack, but the injury wasn't enough to stop Becks from kicking a ball around with Brooklyn, Romeo and Cruz. As he gets back to work on the field, David recently talked about his modeling gig, revealing why he won't do an Armani underwear ad with Angelina Jolie. He said, "She's an amazing person and so is Brad. They're an incredible couple -- got an amazing family. You know she wouldn't do it and I wouldn't do it. At the end of the day, I wouldn't do it because I'm married." While teaming up with Angie would be hot, it sounds like Becks is happy posing in his skivvies with Victoria only. 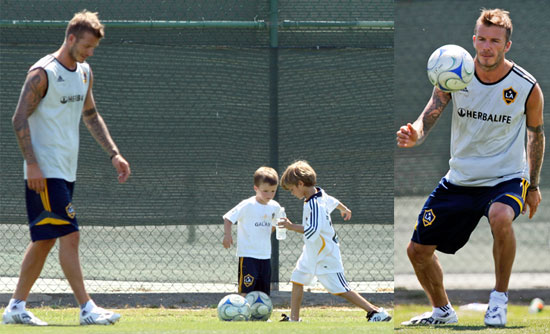 More of Becks and his boys so just read more.