The Beckham family piled in their car Friday for a special dinner at Nobu. David's back in LA after spending much of last week abroad playing with the English team in both London and the Ukraine. While he was able to fit some fun into his time away, it looks like an evening with Brooklyn, Romeo, and Cruz was David's top way to celebrate coming home. David is a busy man with his soccer, including his latest shirtless Galaxy game yesterday, and Victoria might have another project in the works too. The Spice Girls reunion is still apparently a no-go, but she's said to have been approached for a cameo in Gossip Girl. Their time all together was short-lived though, as Victoria was looking good arriving at London's Heathrow this morning. 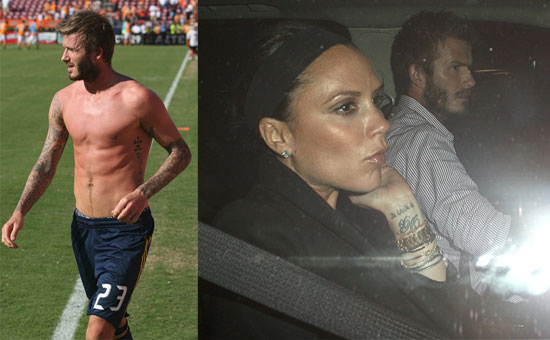 Halloween
Kristen Bell's Kids Clearly Take After Their Parents, 'Cause Their Latest Prank Is Hilarious
by Yerin Kim 1 day ago

Britney Spears
Britney Spears Just Shared a Rare Picture of Her Family, and Her Caption Is the Sweetest
by Navi Ahluwalia 4 days ago

by Tarah Chieffi 11 hours ago