Drew Barrymore cheered from the sidelines as the Lakers defeated Oklahoma City last night in LA. She drank beer with a friend, posing for pictures before heading over to Bardot for a Cat Power concert after the game. Drew's been busy promoting He's Just Not That Into You, which paid off big when the movie opened at number one. Throughout all the interviews she's been asked about relationships even joking that she's single because guys are intimidated by her tongue ring. She may think that but there were probably many fellow fans in the audience last night who would have happily joined Drew and her piercings courtside. 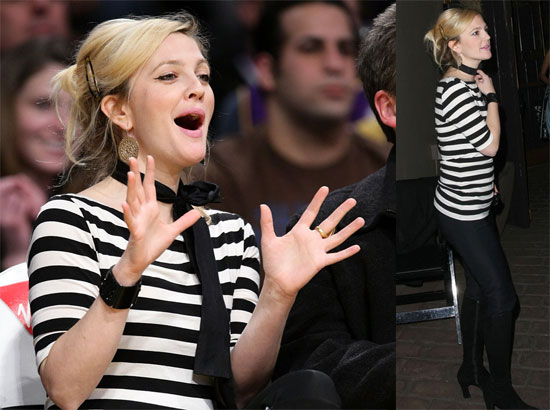 Drew BarrymoreCelebrity Sports
Around The Web

Drew Barrymore
Drew Barrymore Has Such a Pure Reaction to SNL's Spoof of Her Show: "The Greatest Thing"
by Karenna Meredith 10/04