The Grammy Award nominations were announced tonight during a star studded show featuring past winners. Fergie and the Black Eyed Peas took the stage, but the night's big stars included Beyonce, Lady Gaga and Taylor Swift who all snagged multiple nods — check out the whole list of nominees here! Knowles topped the list with a whopping 10, while Swift was close behind with eight. The Peas and Kanye were among those who got six each while Gaga and Jay-Z are up for five apiece. Katy Perry was busting out of her dress during the festivities while Nick Jonas performed with his new band The Administration. LL Cool J hammed it up as the night's host — congrats to all the nominees! 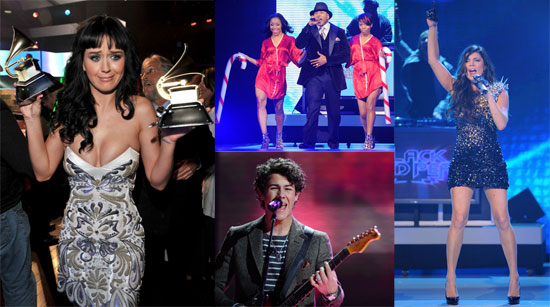 To see more pics from the event just read more.

Saturday Night Live
Kevin Jonas Crashed Nick's SNL Monologue to Finally Get an Answer: "Are We Still a Band?"
by Karenna Meredith 1 week ago

Nick Jonas
SNL Finally Said What We All Think About Bachelor Parties, and They Made It Into a Song
by Mekishana Pierre 1 week ago

Nick Jonas
SNL Is on a Mission to Ruin Our Childhoods, and Now It's Sullied Cinderella
by Mekishana Pierre 1 week ago