The big winners at Saturday's SAG Awards headed into the press room after picking up their statues. Alec Baldwin and Tina Fey were both recognized for their work in 30 Rock, while Christina Hendricks and the cast of Mad Men spoke to the press without Jon Hamm, who was onstage presenting. Diane Kruger and her Inglourious Basterds boys were so excited after their win for Best Ensemble Cast, telling us they texted Brad Pitt to share the good news. Drew Barrymore was likewise thrilled with her latest honor, after picking up a Golden Globe the week before for Grey Gardens. 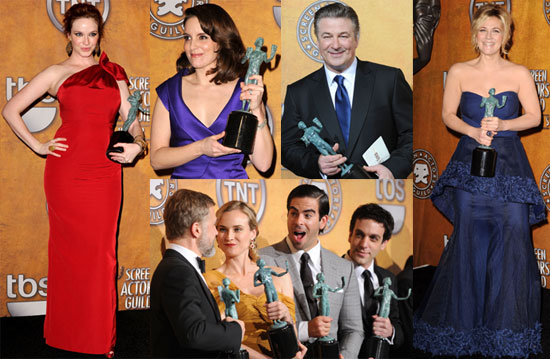 Jane Lynch lead the cast of Glee, as her costars Dianna Argon, Cory Monteith, Matthew Morrison, and Jessalyn Gilsig clutched their Actor statues. Crazy Heart's Jeff Bridges sweetly brought his wife onto the press room podium to have her answer questions beside him, crediting her with his success and the raising of their three daughters. Mo'Nique was also thankful to her husband in her remarks following her win for Precious, saying that they get their emotions out during special "bathroom talks." Kevin Bacon had nothing but glowing words for his own wife, Kyra Sedgwick, after a visibly emotional acceptance speech onstage. Sandra Bullock stuck with the theme after already thanking her "hot" husband Jesse James, admitting she'd rather attend events for his work any day over awards shows. There was a whole lot of love coming from the winners — make sure to check out all the night's honorees! 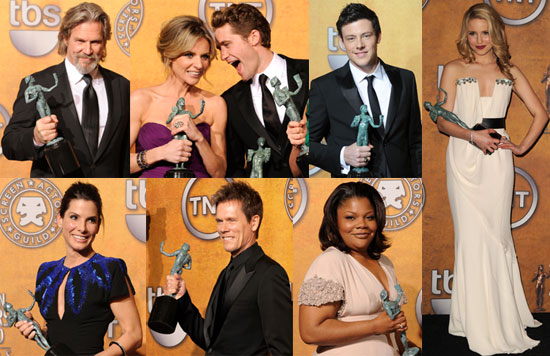 More photos from the press room so read more