Gwen Stefani, Kingston, and Zuma accompanied Gavin Rossdale to the K Swiss Celebrity Charity tennis event near Palm Springs yesterday. After a weekend of running around shirtless, Gavin was little more covered up this time in a t-shirt bearing his older son's name. Gwen recently revealed in a radio interview that Kingston is a fan of Britney Spears these days saying, "Any song that comes on, he’ll get pissed if you turn the station. He’ll be like, ‘That's my song! That's my song!' He's really into Britney's songs. He's really into her! He thinks she's really great and cute and he flirts with her and stuff." Wonder if his music taste will change when he hits the road with No Doubt this summer — tickets are on sale now, the best of which are being sold through the venues in an effort to avoid Ticketmaster's fees. 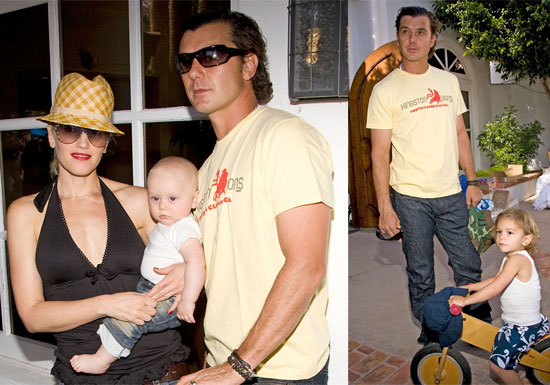