Heidi Montag and Spencer Pratt's frequent photo ops provided inspiration as yet another artist turned her into artwork. Last night the couple headed to a Hollywood art gallery event, "Lights! Camera! Election!," where Heidi showed off an artistic depiction of her ridiculous grocery store poses modeled after the famous Obama "Hope" piece. The couple laughed and smiled their way around the rooms, stopping to kiss countless times for the cameras and imitate a picture of Barbie for president. It's no secret who these two are voting for, but as always the most important campaign is for themselves. 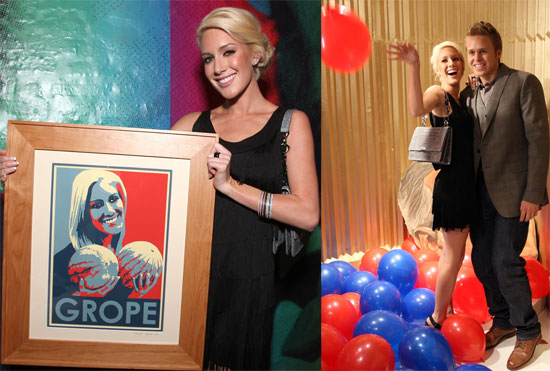 To see more photos of Heidi and Spencer as well as RuPaul, Alexis Arquette, Jesse Metcalfe, and others just read more.