James Franco kicked off his weekend with a ceremony celebrating his status as the Harvard Hasty Pudding Club's Man of the Year in Cambridge on Friday. The thespians threw James a quickie bar mitzvah as part of his roast, which included wearing an eye patch and a bra in honor of Pineapple Express. James never had a real bar mitzvah, but seemed happy with the substitute as he joked, "Yeah, I guess I wasn't a man until tonight. I don't know if this counts in rabbinical law or whatever, but if it doesn't, I do plan to have a bar mitzvah." James was also a good sport as he kissed his pudding pot and even agreed to pretend to milk a gay cow as a throwback to his Oscar-nominated film. 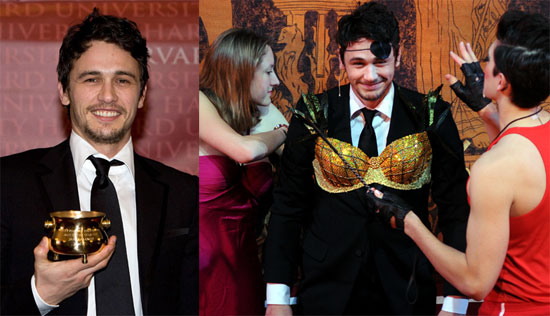 More of James goofing around and milking a cow if you just read more.