Jay-Z worked up his appetite yesterday with an appearance to promote the new DJ Hero game, which features a few of his songs, in NYC. He opened up about his favorite tunes at the event, revealing that he loves to exercise to Fergie's "Big Girls Don't Cry." Jay-Z said, "I really like that song. I would sing it really loud no matter where I was at in the gym, and I know a couple other guys were singing and they won't say it." He was then off to meet up with Beyonce for lunch at Nello's, where they sat and chatted with friends before going on their way. Jay-Z has another big appearance tomorrow — he and Alicia Keys are scheduled to perform at the first game of the World Series. 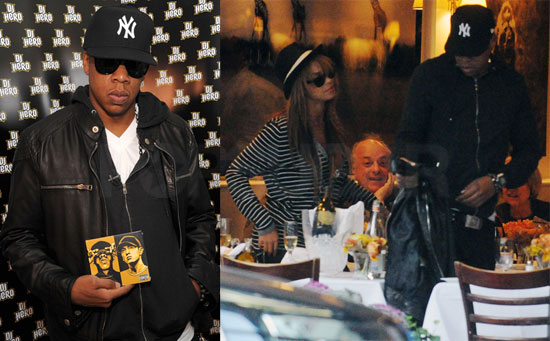 To see more of Jay-Z and Beyonce, just read more.