Jennifer Garner rang in the new year in LA, and she was up early the next morning for a stroll in Santa Monica. She brought along her girls Violet and Seraphina, who was nestled in the arms of a nanny. They stopped off at a children's shop, where Violet explored some of the merchandise under Jennifer's watchful eye. At one point Violet had her mom bend down to kiss a boo-boo on her foot. Jennifer took home the honor of being your favorite down-to-earth mother of 2009, though she's not the only Garner-Affleck who earned praise — Seraphina was your number one new addition of the year, and her name also earned a Sugar Award. Ben was with his girls yesterday afternoon for a special foursome outing to the Brentwood Country Mart. 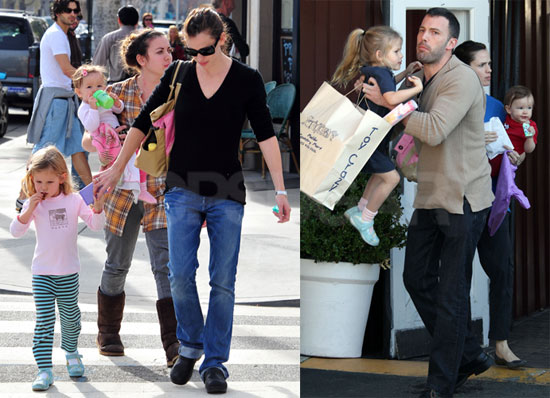 To see more of the Garners, just read more.