The MTV VMAs was a party in itself, but when the show ended all the celebs spread out around town to keep the good times and red carpet highlights rolling. Lady GaGa was joined by Kristin Cavallari, Russell Brand, Jessica Alba, and Diddy for a bash at Avenue, while an Epic Records dinner at the Waverly Inn brought out Jennifer Lopez, Marc Anthony and Shakira. Pete Wentz hosted friends at his bar Angels & Kings, and InTouch's ICONS + IDOLS soiree gathered Kim Kardashian, Whitney Port, Gerard Butler and even Jon Gosselin. Jay-Z hit the official MTV post-awards celebration, as did Justin Timberlake and a tummy-baring Rihanna, before heading to 1Oak for an after-after party with Jessica Alba and Katy Perry. 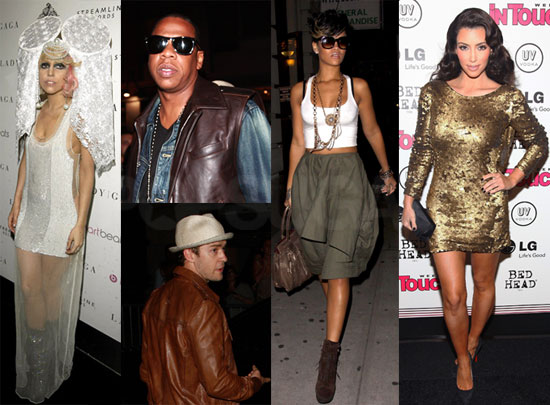 To see more from the night, including Diddy, Alessandra Ambrosio, and Russell Brand, just read more.