Kristen Stewart and Dakota Fanning caused minor pandemonium last night when they arrived at NYC's Landmark Sunshine theater for their NYC premiere of The Runaways, presented by Tommy Hilfiger and Quintessentially. We had a first look at Kristen showing some leg in her Pucci minidress, and Dakota also looked great in her Valentino. We caught up with Dakota at Tuesday's press junket, where she opened up about the process of channeling Cherie Currie. Yesterday, she was happy to talk about all the fun she and her female costars had on set and said Kristen's become "one of my best friends." Kristen, meanwhile, revealed she occasionally gets tired of all the prep it takes to get ready for events. She also weighed in on the Breaking Dawn director drama and said she's excited to see who they pick, and once press for this film has wrapped, she actually has a vacation coming! Exclusive video from the exciting night coming up so stay tuned for PopSugar Rush. 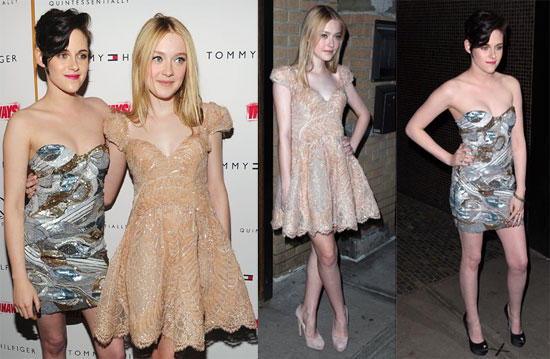