Kristen Stewart looked snazzy in her suspenders, rolled-up jeans, and blazer while posing at a photo call with Taylor Lautner in Mexico City today. The two have already been quite the jet-setting duo promoting New Moon, but aren't causing the same level of frenzy that Robert Pattinson has been in Japan. Today we got a sneak peek at Kristen trading in her casual style for formal wear in her Harper's Bazaar shoot with Rob. Taylor Launter looks happy being the one on Kristen's arm at the moment, since their relationship is the center of the film, but we're also wondering if he'll be back with his girl Taylor Swift to make a cameo on her SNL this weekend. The Twilight cast will be in LA on Saturday for their press day — don't forget to leave questions for the stars all week long for a chance to win! 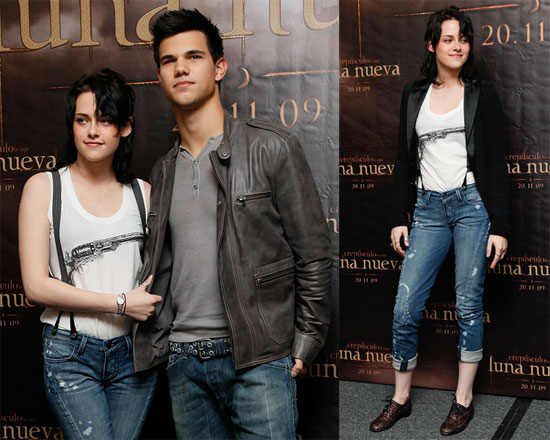 Lots more of Kristen and Taylor in Mexico so read more