Lindsay Lohan was spotted leaving Jason Segel's home in the Hollywood Hills on Saturday morning after apparently spending the night. He stepped out shortly after, clutching the doll he featured prominently in Forgetting Sarah Marshall. She was quick to shoot down any rumors of their being romantic, going on Twitter to write that she thought it was funny to be linked to someone she's working with. Their project is unknown, but it's not the first time she's been associated with the How I Met Your Mother star — during another of their recent nights out at the Chateau Marmont, he was apparently overheard telling friends, "Don't judge me because I'm sitting with Lindsay Lohan." The Chateau was also the setting for her NSFW photo shoot for Muse magazine, but she was at the Roosevelt Hotel solo on Saturday. 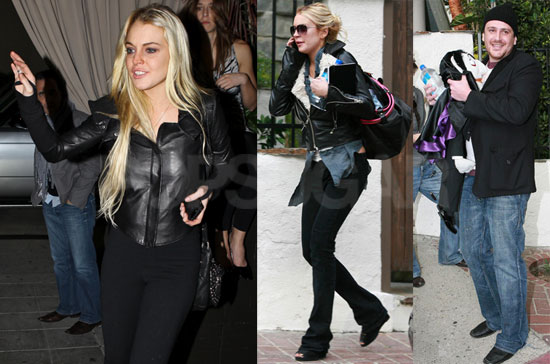 For more photos of Lindsay and Jason just read more.