Matt Damon looked perfectly handsome on the NYC set of The Adjustment Bureau this morning. Last week he filmed with Mayor Bloomberg, who makes a cameo in the movie, and this time he was with his costar Anthony Mackie. Damon's The Informant! was well reviewed and opened at a respectable second place at the box office. Matt still takes time for his charity work including today stopping by Clinton's Global Initiative conference to talk about his commitment to bringing clean water to Haiti — more on that soon. Meanwhile, last night Jennifer Garner proved her loyalty to husband Ben Affleck's beloved Red Sox by reciting the starting lineup and as a Sox fan myself, I wonder if Matt's wife Luciana could do that too? 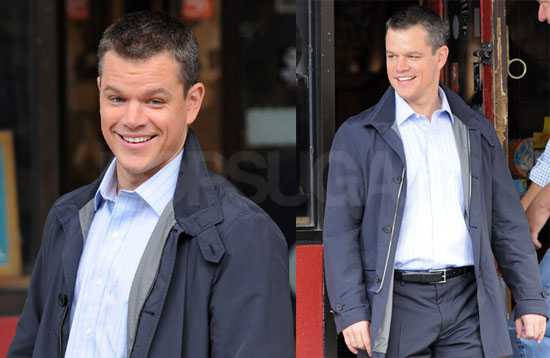 Anthony Mackie
Anthony Mackie Does His Best to Shut Down Captain America Rumors, but We're Not Fooled
by Grayson Gilcrease 1/20