Matthew McConaughey promoted j.k.livin on both his t-shirt and hat on his way out of his office in LA yesterday. It's been a month since MM, Levi and pregnant bikini-clad Camila were out together in Malibu, and as we head into the Fall their beach days are less frequent even in sunny southern California. Matthew's next movie, Southbound doesn't start filming until next year, so in the meantime he's putting his star power to good use. Matthew recently filmed a PSA encouraging people to support people who have given so much to our country through military service. In the 30-second spot, which will air on all the major TV networks this Fall, MM says, "It's our duty to serve veterans and military families who serve their country in the most difficult ways imaginable. Let's honor their service with ours." 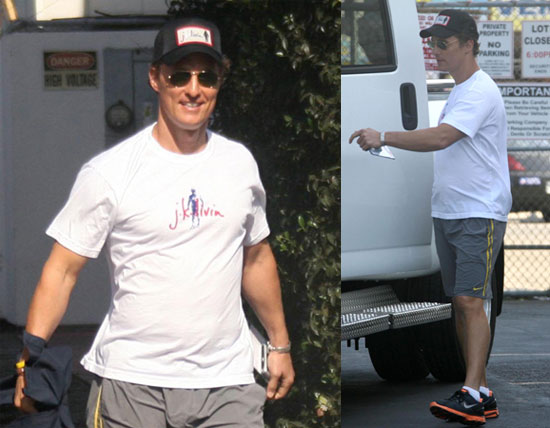 Matthew McConaughey
Around The Web

The Tonight Show Starring Jimmy Fallon
Matthew McConaughey Guessing Famous Songs Is a True Delight, Even With His Spotty WiFi
by Grayson Gilcrease 8/08/20