The Angels of Victoria's Secret gathered in NYC yesterday for their annual runway extravaganza. Adriana Lima, who opened up last week about sneaking candy into her diet, joined Alessandra Ambrosio to lead the girls prepping during the afternoon, and we had a chance to watch as they had their hair and makeup done — stay tuned for the video to come on PopSugarTV! Alessandra spoke about how she loves the way the girls have all become friends, while Karolina Kurkova, back with the company after taking last year off to have her son, said being a member of the VS family is a big compliment. Others like Lily Donaldson and Chanel Iman attested to a solid night's sleep being the secret to looking great for the cameras, while Izabel Goulart commented that she didn't diet or anything because she was just born looking good. It was a sentiment echoed by her fellow Brazilian Isabeli Fontana. Adriana was the first girl to strut down the catwalk, but instead of her winged outfit, she debuted leather body armor. Karolina, Alessandra, and more followed later, each sporting looks from the show's six categories of Tough Love, Game On, Country Girls, Heavenly Bodies, Wild Things, and Pink Planet. 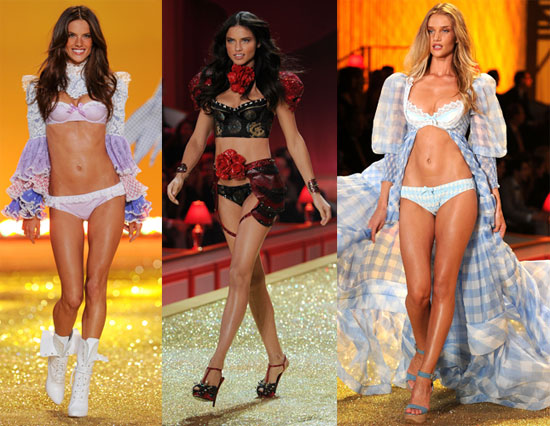 The stage elaborately changed from theme to theme, with Katy Perry stepping out to sing "Fireworks" and a medley of songs and Akon fittingly performing "Angel." There were plenty of famous guests there to check out the proceedings as well. Paris and Nicky Hilton were in the front row, as were Adrian Grenier and Malin Akerman. Twilight's Billy Burke brought his girlfriend, telling us that his character Charlie Swan wouldn't be too happy to know about what's going on in Rio right now. Caleb Followill of Kings of Leon was there to support his model fiancée, Lily Aldridge, while Adam Levine rounded up the boys of Maroon 5 to cheer on his own love, Anne V. Vin Diesel, however, stole the show despite not having a lady on the stage — he treated the Lexington Avenue Armory like his own personal nightclub with dancing, fist bumping, and indoor sunglasses. Michael Bay, meanwhile, made a late entrance to cheer on his Transformers 3 star Rosie Huntington-Whiteley. The full show airs Tuesday, Nov. 30 at 10 p.m. on CBS. 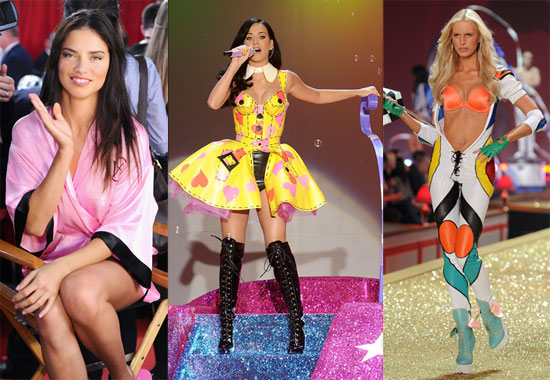