Penelope Cruz and Javier Bardem found something to chuckle about as they arrived yesterday at JFK airport in NYC. Now they really have something to smile about — Penelope was nominated for a Golden Globe Award this morning for her acting in Nine, as were her costars Daniel Day-Lewis and Marion Cotillard! Penelope and Javier are on the East Coast after a weekend together in LA, where they managed to fit in a double date night with Josh Brolin and Diane Lane following some time on their own. Penelope missed last night's Nine event at Per Se with Kate Hudson and Nicole Kidman, but she's in the Big Apple just in time for this evening's premiere. Javier has yet to accompany Penelope down any red carpets thus far, but it looks like he's at least by her side for part of the traveling she has to do before her movie hits theaters on Christmas. 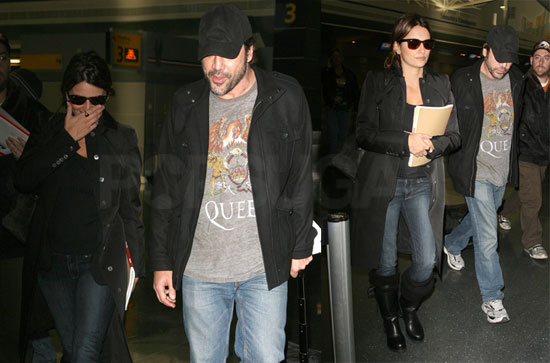 To see more of Javier and Penelope, just read more.