Gisele Bundchen had her water bottle in hand during another walk in Boston earlier today. The pregnant supermodel is back in Massachusetts after her weekend trip to NYC, where she announced her participation in a new environmental program with the UN. Her baby bump isn't slowing her down, whether she's out moving furniture or taking flying lessons in a helicopter. She and Tom are looking forward to his coming season with the Patriots, but one ugly episode from their past just won't go away — they're being sued by photographers who claim they were shot at during the couple's wedding in Costa Rica earlier this year. 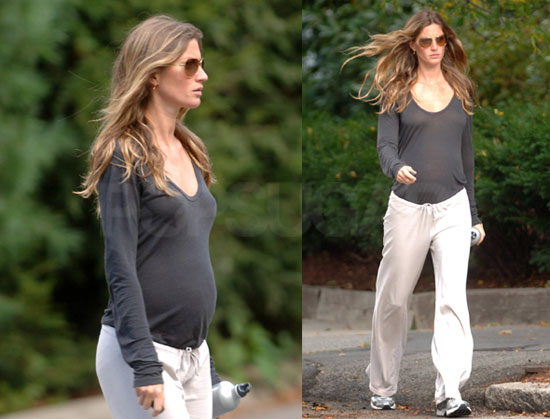 Gal Gadot
Gal Gadot Is Pregnant With Her Third Child: "Here We Go Again"
by Monica Sisavat 6 days ago
Emma Stone
Emma Stone and Dave McCary Were Spotted in LA as They Gear Up For Parenthood
by Karenna Meredith 1 week ago