The scruffy and handsome Hugh Jackman was chosen as People's Sexiest Man Alive for 2008, perfectly lined up with the premiere of his epic Australia with Nicole Kidman. Nicole is one woman who isn't surprised by the choice, saying: "Women's jaws drop when Hugh walks into a room." Hugh talked to People about earning the title: 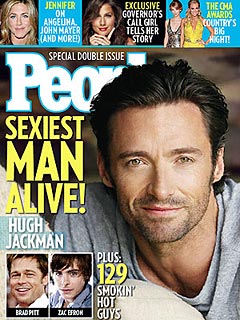 The hot Aussie has come a long way from being teased as a kid and admits that ladies love his pecs these days while showing off a very romantic side. We were a bit surprised by the choice, but what do you think of Hugh as Sexiest Man Alive? Check out the full list of winners including Jon Hamm, eligible bachelor Robert Buckley, Joshua Jackson, David Beckham, Robert Pattinson, and more.

People
John Legend Thanks Michael B. Jordan For Taking Over as This Year's Sexiest Man Alive
by Yerin Kim 11/18/20