Ryan Reynolds stopped by The Rachel Ray Show today to talk about running the marathon for a cause so close to his heart. He didn't dish on Scarlett, but the newlywed looked fantastic and continued to charm with his personality. While on air, he was surprised by Michael J. Fox, who had some really sweet things to say about Ryan and some sage marriage advice to impart to his younger friend. Here are highlights: 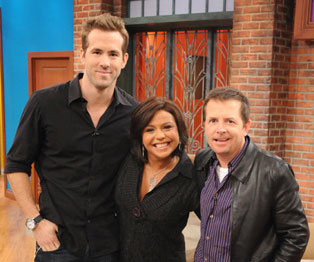 It sounds like Ryan and Michael have a lot of mutual respect and admiration for each other as they continue to work toward a cure for Parkinson's.

Ryan Reynolds
Ryan Reynolds Says His Wife and 3 Daughters Are Superheroes: "I Love Being a Girl Dad"
by Karenna Meredith 11/15/20