Tom Cruise looks like his Color of Money character with his powerful stare on the cover of Details magazine. John Mayer, Robert Downey Jr., and Nick Jonas all made this year's "Power List" with Tom at No. 7 spot as Leading Man. Tom talks about controversial Valkyrie and what he has in common with his character. Here's more: 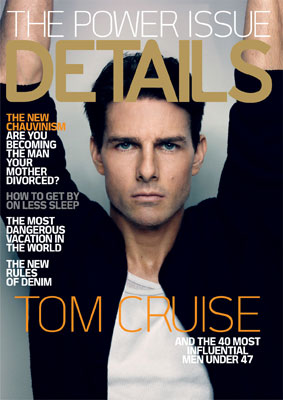 Tom Cruise sounds passionate about his new movie, which opens up Dec. 26. It may not seem like cheery holiday fare, but it will be a typically action packed Tom Cruise film.

Tom CruiseDetails
Around The Web