The MuchMusic Video Awards hit Toronto last night with a star-studded red carpet and a stage scattered with big performances. Taylor Lautner represented for the New Moon cast, smiling big and waving to the screaming adoring fans. Audrina Patridge sexed it up as usual in her LBD, though somewhere along the line she managed to piss off someone who apparently took Brody Jenner’s phone and called her a nasty name on his twitter. The Black Eyed Peas — who won International Group Video of the Year — the Jonas Brothers and Lady Gaga were among the night's performers. 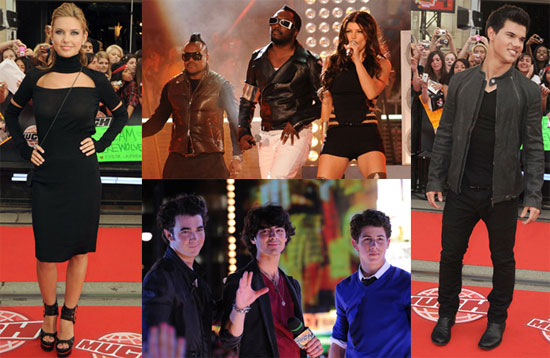 Celebrity Instagrams
As an Early Holiday Gift, the Jonas Brothers Just Released a Christmas Song All About Family
by Chanel Vargas 4 weeks ago

Nick Jonas
Nick Jonas May Have a Tiny Tattoo Collection, but Each One Sends a Powerful Message
by Danielle Jackson 10/27