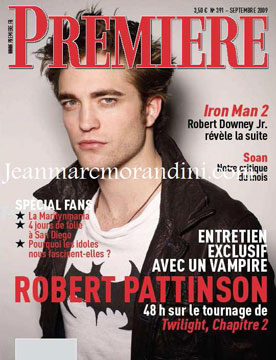 Robert Pattinson strikes a serious pose while wearing a Batman shirt on the latest cover of France's Premiere. The magazine doesn't hit newsstands until next week, but apparently we can expect an exclusive interview with the actor along with new pictures. Rob has been laying low in Vancouver since his now infamous PDA-filled Kings of Leon concert, although his face is still popping up everywhere. The latest People has new photos of Edward Cullen and Dakota Fanning's Jane in New Moon; check out the scans in the gallery below.

Also, don't forget to submit your votes for our Hottest Shirtless Guy contest now that it's down to just Rob and his costar Kellan Lutz!