Andy Samberg kept the star-studded crowd laughing the whole night at the Robert Pattinson Appreciation Awards, we mean MTV Movie Awards, in LA yesterday. After the gorgeous men and women walked the red carpet, Andy opened the show spoofing the year's biggest movies — from The Reader to Star Trek. Really though, all show long Twilight found its way into almost every segment in some way. There were lots of other funny moments including an homage to movie explosions, a dramatic medley of SNL digital shorts songs which starred Forest Whitaker singing "D*ck in a Box," and Bruno flying through the air and landing on an enraged Eminem. Em did not look happy as he stormed out of the theater afterwards. 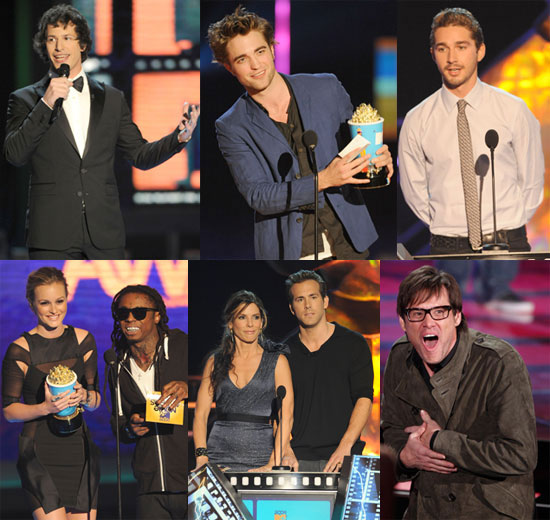 It was no surprise that Twilight was the big winner of the night which led to many wonderful moments like the almost Robert Pattinson/Kristen Stewart kiss, Rob bringing our attention to the happenings in his pants, and Kristen nervously dropping her golden popcorn. Another huge highlight was the exclusive New Moon trailer — looks amazing. It might have been the only moment the theater was quiet in rapture rather than screaming Robert's name at random intervals. There were lots of other happy winners like Zac Efron, Jim Carrey, and Ben Stiller who was presented the Decade Award by a teary Kiefer Sutherland. It was a fun night all around, let us know your favorite moment and don't forget to vote on all of Bella and Fab's love it or hate it polls! 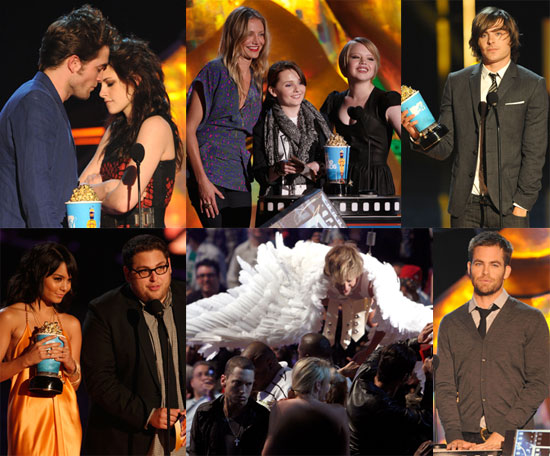 LOTS more pics from the show so read more