Robert Pattinson, Kristen Stewart, and Taylor Lautner were together for last night's special NYC screening of New Moon along with their many costars. It looks like they split up for the afterparty, though, with Robert and Kristen spotted afterward looking far more casual on their way out of a lounge in the city's Meatpacking District. The official afterparty was held in a different neighborhood at The Box, where Ed Westwick and Jessica Szohr were spotted making a hasty retreat in the rain. Ashley Greene, Nikki Reed, and Peter Facinelli were also there to party with a select group, and he even stopped to pose with fans on the way out. Elizabeth Reaser and Taylor had to rest up for an appearance this morning; he headed to The Today Show, so check his interview out after the jump. 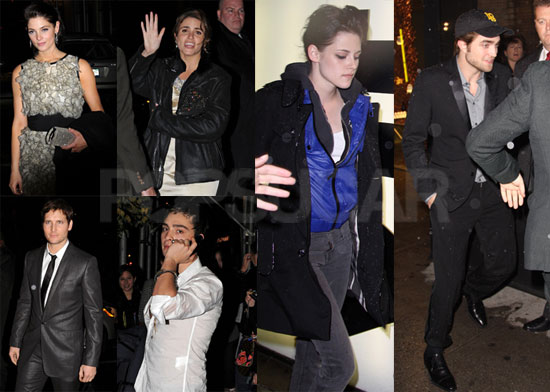 Visit msnbc.com for Breaking News, World News, and News about the Economy