Robert Pattinson tried to stay hidden under his cap and hoodie last night as he left London's Lyric Theater, where he saw a performance of the apparently very creepy play Ghost Stories with Tom Sturridge. Rob was caught grabbing a few beers in a blurry photo alongside a female pal, who is apparently Tom's girlfriend. Meanwhile, Ms. Stewart was dining with musician Dee Snider and a few of her costars from The Runaways in Las Vegas. She's off again after only arriving in LA a few days ago to do some solo house hunting, and so far her long-awaited vacation itinerary hasn't included a trip to England. Rob's been logging long hours on the set of Bel Ami anyway, and we have the run up to Eclipse's release to look forward to them together. 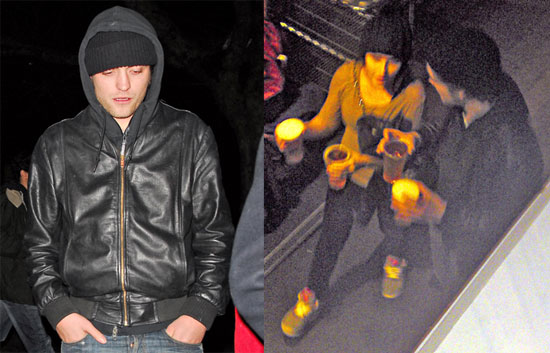