Daniel Craig found a way to make his injured arm look dashing at last night's royal London Quantum of Solace screening. The world premiere brought out some very special royalty indeed — Princes William and Harry both graced the red carpet looking dapper in their tuxes. Ever the polite Bond, Craig still found a way to shake William's hand. Craig had to field questions about the accident while filming that left him with an immobile wing but when asked about his favorite Bond girl, he had the perfect answer saying, "The one on my arm of course," about his lucky girlfriend Satsuki Mitchell. The intense looking Bond installment hits theaters in a little over two weeks and while seeing more of Daniel Craig will be a treat, I unfortunately don't think those handsome princes will be making the premieres with him. 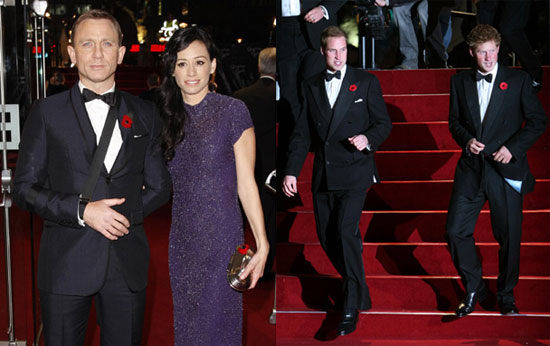