James Wilkie Broderick was still showing off his Obama pride yesterday on his way to school with his mom Sarah Jessica Parker. Post-election, SJP is keeping the politics going working on her new HBO series, The Washingtonienne, as well as recording an audio tour for an upcoming exhibit at the Met. One project she's not starting quite yet is the sequel to Sex and the City that Kim Cattrall recently confirmed. Sarah Jessica said, "I’m thrilled to know Kim is excited but all the deals are not yet done. With ‘the wind on our heels,’ we hope to make it a reality." That sounds like a work in progress, but hopefully it just means SJP is waiting for the right time to confirm it herself. 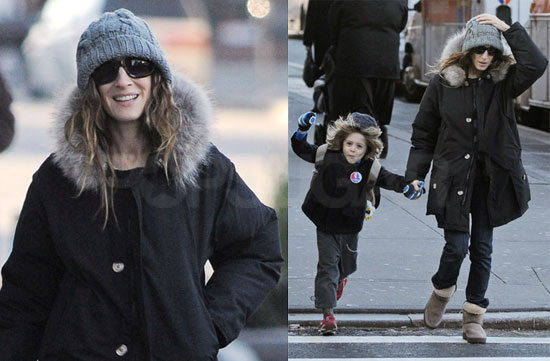 Baby Names
Gigi Hadid Just Subtly Revealed Her Baby Girl's Name, and It's So Beautiful
by Yerin Kim 12 hours ago

Kamala Harris
Everything We Know About Meena Harris's 2 Kids, Amara and Leela
by Alessia Santoro 1 day ago