David Beckham suited up for his flight to Germany, but when took the field in Bremen last night was considerably less dressed. He only spent a few minutes playing because of a hamstring injury, but that was more than enough time for him to thrill fans by taking off his jersey. While his agents are trying to hammer out a deal that would allow him to stay with AC Milan, we'll focus on his rock hard abs. It's not quite as steamy as his sexy Armani underwear ads, but no matter where he is shirtless Beckham will always be a welcome sight. 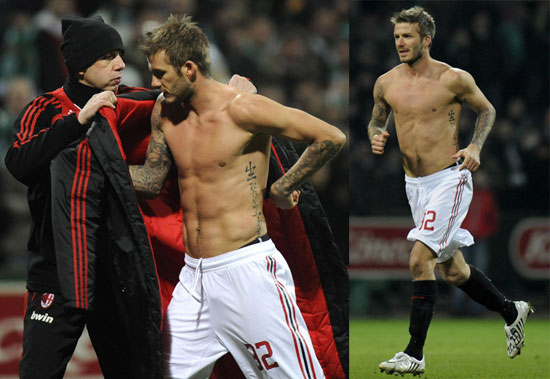 To see more photos of David without his shirt just read more.

Eye Candy
Get to Know Ismael Cruz Córdova, the Cute Actor Behind The Undoing's Devoted Dad
by Perri Konecky 23 hours ago

by Jessica Harrington 2 minutes ago