David Beckham was shirtless and scruffy at the end of the Galaxy's home game against the Chicago Fire on Friday night. He helped lead the team into a victory before fielding more questions about his career move plans. Becks is heading to England this week for two more World Cup qualifying matches and he's still finalizing the details of his return to AC Milan. He spoke about what the future holds saying, "I'll finish when I feel my legs can't take any more, then I'll start enjoying family life. I want to play as long as possible. I have two years left on the Galaxy contract and then, who knows?" Speaking of his loved ones, Victoria's apparently not interested in another Spice Girls reunion instead opting for life at home in LA with her boys when she's not traveling the world for her fashion career. 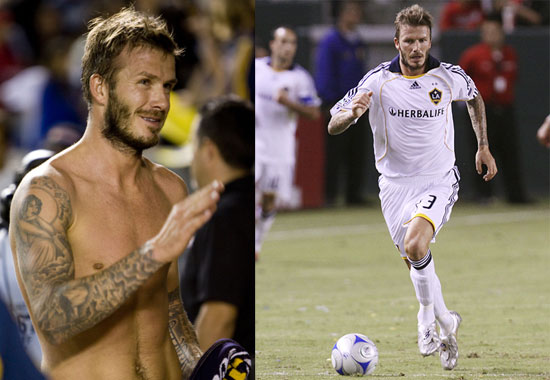 Unstoppable
Women's Sports Lack Coverage, So Alex Morgan and 3 Other Athletes Started Their Own Company
by Samantha Brodsky 1 day ago

Sports
These Black Softball Players Are Done With Stereotypes, Microaggressions, and Being Ignored
by Maggie Ryan 6 days ago

Healthy Living
With 6 Months Until the Paralympic Games, These Are the Athletes We Are Excited to Watch
by Christina Stiehl 1 week ago