If there wasn't enough star power for you on the Oscars red carpet or at the Elton John party, you're in luck because there's even more at the Vanity Fair bash! We took a look at the amazing and adorable inside shots from the event, but the lush greenery outside the Sunset Towers makes for some gorgeous arrivals shots. Stephen Moyer and Anna Paquin are becoming pros at posing together, while Jennifer Westfeldt made sure to stick by her handsome man Jon Hamm's side. Taylor Lautner was solo for a bit but spent much of his evening with Twilight saga costar Kristen Stewart, who was spotted sneaking out barefoot at the end of her night. Kate Bosworth and Alexander Skarsgard are still playing the separate arrivals game, and Natalie Portman didn't bring her rumored ballet-dancing boyfriend. 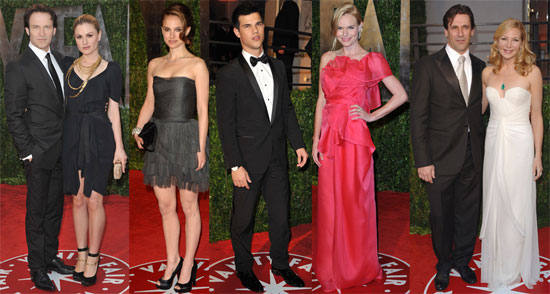 Diane Kruger changed out of her controversial Chanel number and into something beautiful and bright, also upgrading her look by reuniting with Joshua Jackson, who we missed at the Oscars. With one Glee girl holding down the fort at Elton, Dianna Agron looked perfectly poised on her way into VF. Bar Refaeli also went long and white without her own Academy Award nominee, Leonardo DiCaprio. Jessica Simpson in a slimming one-shoulder gown joined in on the award season finale. Lenny Kravitz brought his daughter Zoe out late while he was simultaneously making a funny appearance on Jimmy Kimmel's Handsome Men's Club skit along with Ben Affleck, Matt Damon, Josh Hartnett, and many other good-looking guys. 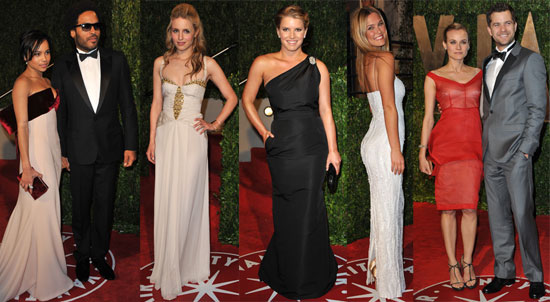