Tom Brady spent the week recovering in LA after last Monday's knee surgery, though it looks like one special guest got him out and on his feet already. Tom's son John Moynahan came to visit at the end of last week, and was spotted with Tom's girlfriend Gisele Bundchen on Sunday afternoon. The supermodel brought the 1-year-old to visit dad while a few hours south in San Diego, his Patriots were preparing for a bad Sunday Night Football defeat. John has his father's handsome stern look already, whether or not he ends up being a star athlete like Tom. 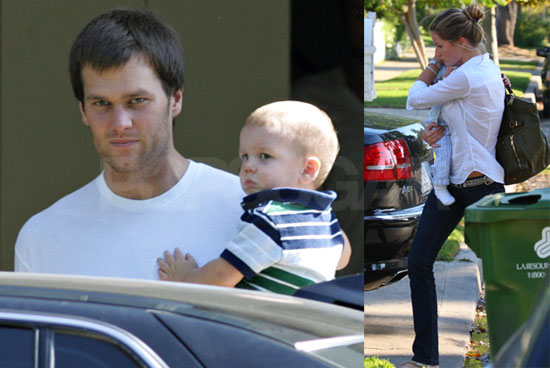 Celebrity Families
Everything We Know About Emma Roberts and Garrett Hedlund's Baby Son, Rhodes
by Alessia Santoro 4 days ago

Baby Names
Emma Roberts Welcomed Her Son Late in 2020, and We Love His Unique Name
by Alessia Santoro 4 days ago

Celebrity Instagrams
Emma Roberts Shared Her First Photo of Baby Rhodes, and Their Matching Looks Are Too Cute
by Yerin Kim 4 days ago